Below is his statement, but what he doesn’t say is the Football Association’s 10-member board and 127-member council are out of touch with reality. What they want, is leaving the FA behind. Which can be witnesses from them not winning a championship since the 1990’s.

Reports suggest that the dissenting voters believe that having American Football gain traction in Great Britain would hurt the FA. Their belief is they can do a better job at keeping Wembley a thriving entity under their direction.

Obviously, they have no clue how Mr. Kahn can meld the traditional with cutting edge technology and produce a better product. Their loss. 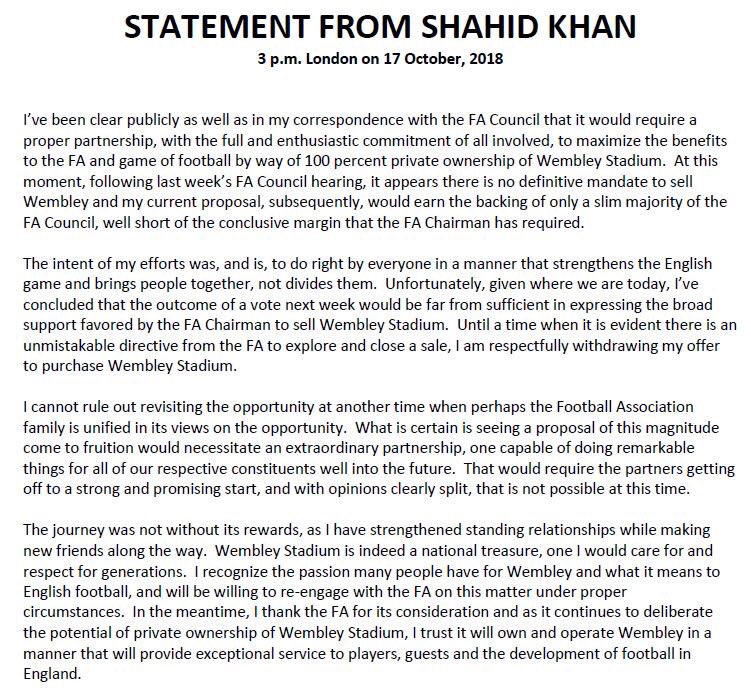 Knee jerk reactions in Jacksonville vary from – yay, no chance now the Jaguars are moved to England, to boo, this means the Jaguars won’t have an extra revenue stream and could end up leaving Jacksonville without a pro team.

There is also fear that some other NFL owner will put in a bid for Wembley or another city will build a stadium and snatch the Jags away.

Here are my thoughts on the above

Would adding Wembley bring in more revenue? Yes. Would it impact whether or not the Jaguars stay in Jacksonville? Probably not unless the Shipyard hits some major snags. Either way, the only thing residents of NE Florida can do is buy tickets and show up.

Moving on to Doug Marrone. He thinks the team has played like shit, that the coaches (pointing to himself first) need to do a better job at focusing on the fundamentals. He believes being 3-3 sucks, but sees it as a good thing because it’s a challenge.

Having a couple of weeks of losing builds a team and tests their mettle – he sees how they can bounce back. What was missing from his words was how they’re going to address the weaknesses on offense. Neither Leonard Fournette or TJ Yeldon practiced today. The Jaguars are now down their starting tight ends and the Oline is beat up.

More questions and answers were about the defense; however, I don’t care if they’re playing lights out, the offense still needs to score points.

Blake Bortles thinks that when injuries happen, it’s up to the QB to make up for them. He also mentioned the bad luck that seems to run with this team and also why they may be last in the differentials. The ball seems to bounce the wrong way. Even so, they need to get back to being the team they know they are.

When he addresses the injuries to the team he said they’re limited on the plays they can run because of them. Even so, they need to find ways to be effective. He also said that scoring early happened in the games they won.

Linebacker Telvin Smith said when it came to the defense getting the ball back, they weren’t causing other teams to make mistakes, which is where turnovers come from. They did better against the teams without running quarterbacks, which they know needs to be fixed. Smith believes they’re fine and will overcome the injuries.

“Stay steadfast, stay committed to us”

Smith was steadfast himself in believing no one has given up. He said he’s seen it before from years past in Jacksonville and that’s not in the locker room. They’ve faced lot of adversity, but they’re over coming it. The bad communication over the last couple weeks will be fixed during practice.

One thing that came across from the three was a difference in attitude. They acted as calm firemen who already put a fire out, but they couldn’t avoid the soot.

View all posts by thetealzone12

Tell us what you think! Cancel reply

This site uses Akismet to reduce spam. Learn how your comment data is processed.